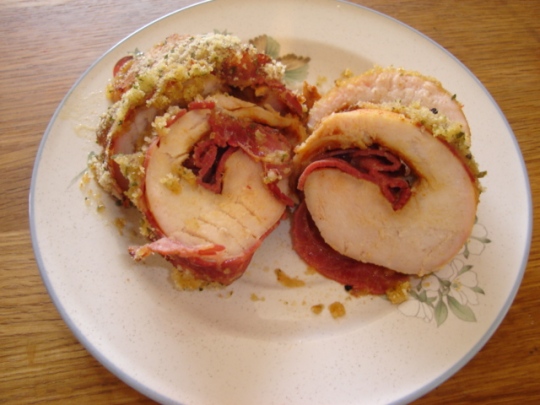 Here you go kids.
An easy and delicious recipe.
As an entree or appetizer it totally rocks both with adults and kids.

From Gmom’s kitchen to yours have a safe and peaceful New Year!

Pound the chicken breast to 1/4 inch thickness. Coat in dry rub and let marinate in fridge for several hours.

6- whole chicken breast, cut in half and pounded to 1/4 inch thickness

Pound out the chicken breast halves to 1/4 inch thickness.

Mix in a small bowl the brown sugar, oil, seasonal, garlic,pepper and paprika.

Rub this mixture all over the chicken and let the chicken marinate in the fridge for up to 6 hours.

In a small bowl stir together the mustard and honey.

Do not rinse off the marinade.

On each chicken half arrange 2 slices of pastrami.
Brush on top of the pastrami a coating of the honey mustard.

Roll up the chicken and place seam side down into a baking pan.

Roll up the chicken breast tucking in to the ends any stray bits for a more uniform presentation.

Arrange rolls in a baking pan so they do not touch. You don't want them to steam. The breadcrumbs you sprinkle on after they are in the pan will crisp with this small difference.

Coat any of the remaining honey mustard on the rolls.

Sprinkle a generous amount of the seasoned breadcrumbs on the rolls.

Serve whole for entree or in one inch slices for appetizers.

This is Cujo and gmom peace out,

Some Smart Thoughts From Bill Gates To My Kids

This should be posted in every school

Love him or hate him, he sure hits the nail on the head with this!

Bill Gates recently gave a speech at a High School about 11 things they did not and will not learn in school. He talks about how feel-good, politically correct teachings created a generation of kids with no concept of reality and how this concept set them up for failure in the real world.

Rule 2: The world doesn’t care about your
self-esteem. The world will expect you to accomplish something BEFORE you feel good about yourself.

Rule 3: You will NOT make $60,000 a year right out of high school. You won’t be a vice-president with a car phone until you earn both.

Rule 4: If you think your teacher is tough, wait till you get a boss.

Rule 5: Flipping burgers is not beneath your dignity. Your Grandparents had a different word for burger flipping: they called it opportunity.

Rule 6: If you mess up, it’s not your parents’ fault, so don’t whine about your mistakes, learn from them.

Rule 7: Before you were born, your parents weren’t as boring as they are now. They got that way from paying your bills, cleaning your clothes and listening to you talk about how cool you thought you were. So before you save the rain forest from the parasites of your parent’s generation, try delousing the closet in your own room.

Rule 8: Your school may have done away with winners and losers, but life HAS NOT. In some schools, they have abolished failing grades and they’ll give you as MANY TIMES as you want to get the right answer. This doesn’t bear the slightest resemblance to ANYTHING in real life.

Rule 9: Life is not divided into semesters. You don’t get summers off and very few employers are interested in helping you FIND YOURSELF. Do that on your own time.

Rule 10: Television is NOT real life. In real life people actually have to leave the coffee shop and go to jobs.

Rule 11: Be nice to nerds. Chances are you’ll end up working for one.

My darling daughter in law sent this to me.

A SPANISH Teacher was explaining to her class that in Spanish, unlike English, nouns are designated as either masculine or feminine.

‘House’ for instance, is feminine: ‘la casa.’
‘Pencil,’ however, is masculine: ‘el lapiz.’

A student asked, ‘What gender is ‘computer’?’

Instead of giving the answer, the teacher split the class into two groups, male and female, and asked them to decide for themselves whether computer’ should be a masculine or a feminine noun. Each group was asked to give four reasons for its recommendation.

The men’s group decided that ‘computer’ should definitely be of the feminine gender (‘la computadora’), because:

1.. No one but their creator understands their internal logic;

2 The native language they use to communicate with other computers is incomprehensible to everyone else;

3. Even the smallest mistakes are stored in long term memory for possible later retrieval; and

4. As soon as you make a commitment to one, you find yourself spending half your paycheck on accessories for it.

The women’s group, however, concluded that computers should be Masculine (‘el computador’), because:

1. In order to do anything with them, you have to turn them on;

2. They have a lot of data but still can’t think for themselves;

3. They are supposed to help you solve problems, but half the time they ARE the problem; and

4. As soon as you commit to one, you realize that if you had waited a little longer, you could have gotten a better model…

Send this to all the smart women you know…and all the men that have a sense of humor. 🙂

Every happy occasion in our family is momentous.

Rebuilding his family,
seeing it grow has always moved him beyond words.

My father in law is a survivor of the Holocaust.

He wrote his memoirs of the war,

the Holocaust Museum in Washington.

This soup recipe is one

my mother in law recreated for him

of a soup his mother used to make in Warsaw.

Let it live on…. and never be forgotton.

– 1 cup of juice from jar of sour garlic pickles

Peel and cut the potatoes into small chunks.

Wash and cut up the celery and onion.

Put the vegetables into a pot with 1 quart of water.

Bring this to a boil covered for 30 minutes.

Put a few ladles of the potato mixture

into the blender with a large spoonful of the sour cream

and a bit of the dill.

When the entire pot is blended with the sour cream and dill add in the pickle juice.

Cut 2 sour garlic pickles into thin rounds and drop those into the soup.

Return the soup to the pot and put on a very low heat for another half an hour.

Season with salt and pepper.

Hey There WP friends here is another easy recipe from The Chef’s kitchen.

Slice the eggplants into rounds and lightly salt them.

Let them sit for at least 20 minutes until they sweat.

This takes the bitterness out of them

Rinse the eggplant off and squeeze out the excess moisture. 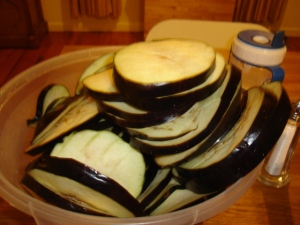 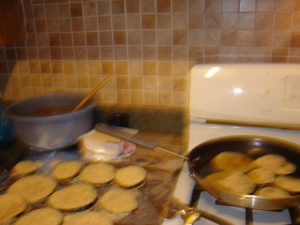 Next dip the eggplant into the seasoned breadcrumbs and briefly fry them.

Put the eggplant aside to cool.

Take your diced onion and garlic and fry them together for 10 minutes, then add

After a few minutes when mushrooms are soft pour in the marinara sauce.

In the tinfoil pans put one layer of eggplant

Spread marinara on top of this.

Repeat this process ending with a a generous topping of cheese.

This recipe makes 3 pans enough to feed a large family.

This is gmom Cujo and Hoo wishing everyone a great week.