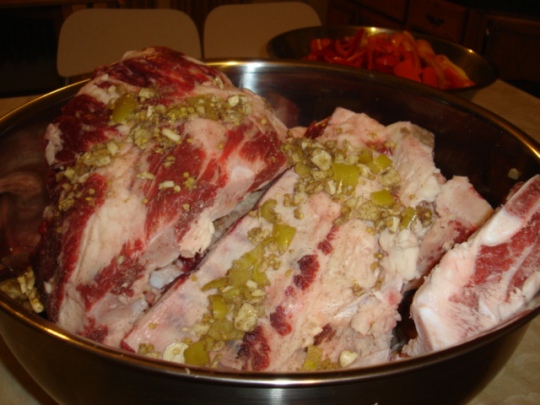 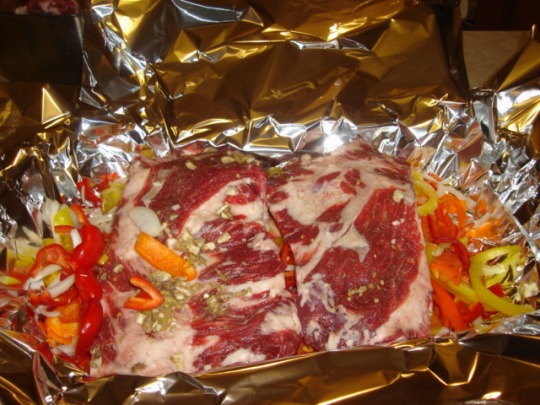 Vegetables on the bottom to start

Layering the ribs and vegetables

Wish this picture was bigger.

These really are the best ribs.
Personally for the fourth of July, I don't want to be hanging over the hot grill.
I want to be drinking with everyone else.

Put these in the oven Saturday night and by morning they are done.

Boil up some corn on the cob.

Combine seasoning salt (Spike), Accent and black pepper.
Rub 1/4 teaspoon on each side of ribs.

Mix garlic and jalepeno peppers with any remaining seasoning mix and rub on each rib rack.

In a large roasting pan lay out a long length of aluminum foil,enough to wrap the ribs when you are done.
Put a layer of onion and the peppers on the bottom and then a couple of racks of ribs side by side.Layer more onions and peppers on top and continue layering.

Tightly wrap the ribs in the foil and leave in the fridge for 2 days to marinate.
I have left mine for 3-4 days with good results and have added red pepper flakes to kick up the heat.

Serve with the vegetables which really wither to almost nothing but those ribs are going to go fast so make more then you think you are going to need.
For my hungry crew I sometimes tuck a hunk of chuck 4-5 pounds into the middle of the ribs and cook as directed in this recipe.
Some people just don’t like the gristle and mess of the ribs and want a piece of meat.
In the pics I have used half of the racks called for in the recipe and then made a second pan. Count on each meat eater eating at least 1 racks of ribs.
I hope you enjoy this recipe.
We love it.
Have a happy fourth.
Be safe friends.
Cujo says hi.